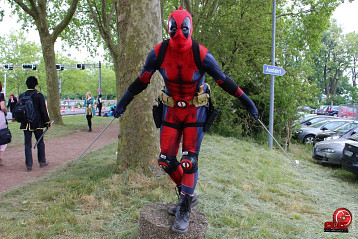 After all this time, I finally made it to a german Convention, Animagic. It was literally AWESOME (no pun intended^^)
A week before the Convention started, that stupid Cosplayer called Kamui_Kuroshi messed my suit up, so he bought me a new one. Unfortunately, the mask, that came with that suit was as dumb as he (Kuro) is, so I sent him to a tailor and let him sew me a new one. I'm not completely satisfied with it, but it was enough for the 2 days I spent at Animagic. The arm and knee pads where painted by me, just like my precious belt buckle. I stole the boots from some stupid jerk called "Dante" who was trying to impress me by telling me that he has his own Demon-slay-game-series. Didn't work on me, cause I'm Deadpool. The belt originally belonged to a strange guy called "Batman". Man, that guy has some serious problems! The guns where bought by Kamui_Kuroshi. I heard that you aren't allowed to bring real weapons to Conventions, so I made him buy me some toy-guns. Thats also the reason why I didn't bring my swords. Instead I took one of Kuro stupid wooden cosplay swords (I think he used it for his Shaman King cosplay, it was made by "Sturmwind") and kicked some asses with that. It might not be a real weapon, but hey, trust me, in my hands its as deadly as Wolverine's claws. I had lots of fun on Animagic, saw a lot of guys cosplaying me (that's the spirit, Team Deadpool for the world!). I'll try to get a better mask next time, maybe for Connichi. This one is pretty annoying, even if you have healing factor like me. By the way, I don't know why, but lots of people seemed to enjoy seeing me commiting suicide. They made me do it about a million times on that weekend and even took pictures of it! That hurt! I didn't know Germans could be so violent and brutal. But hey, I'm the Deadpool, so who cares anyway?
Update:
I visited Connichi a few days ago, trying to recruit new members for Team Deadpool. Well, I'm proud to say it was a huge success! Team Deadpool now has some AWESOME new members, like Widow-Pool, Poolzilla, J-Pool, Boota-Pool, Rey-Pool, Superpool and, most important, Poolverine!!! I just wanna say thank you guys for joining the greatest Team in history (screw the Avengers, X-Men and Justice League, we are awesome!). And always keep you member ID close to you^^
Well, everything thats left to say for me at the moment, is "TEAM DEADPOOL"!!!

Behold guys:
An update has arrived!

As I already told a few of you, I was planning to get a new and improved suit and mask (and of course I wanted to upgrade my weapon arsenal "a little").
I'm proud to announce, that stupid cosplayer kamui_kuroshi has manged to get me all the stuff I wanted (well, at least most of it). And all it took was me threatening him to shoot his d*ck of. Life should always be as easy as this.
I already wore the updated suit at Dutch Comic Con 2015 in Utrecht (yeah, I know what you are thinking: You went to the Netherlands?!? And yes, I'm just as surprised as you are^^).
Unfortunately, I shot all the people that took pictures (except the ones wearing Deadpool merchandise, I love these little fanboys^^), so you won't find a huge amount of new pictures featuring me right now.
But I will visit many Conventions in Germany this year, so expect me to show up on a Con next to you very soon!
And be prepared to be asked the most important question of your whole life:
"Hey, I just met you. And this is crazy! But I am Deadpool, so join this Team maybe?"

By the way, a lot of people were asking me why I didn't have my twin swords. Well, bitches, time to ask is over!
Deady-Pool will bring his favourite twins to every goddamn little Convention from now on. Stupid German airport customs. I had to deal with them to get my swords. And by "dealing" with them I mean...come on, you guys know what I mean.